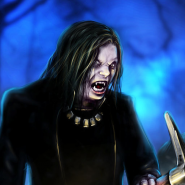 VEmpire-The Kings of Darkness – this game not only contains a fascinating story about the times of the Roman Empire that vampires have infested, but it also allows the player to decide with whom to fight, with AI of different levels or with other players. The whole game will be according to the type of games on the usual table. All you need to choose one of the vampires and lead your card troops under his leadership. Use different combinations, attacking and defensive magic, as well as many other tactics to defeat the enemy.