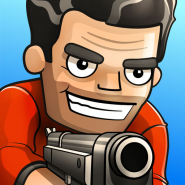 Storm the Train is a fun game for iOS where you will help the protagonist of the game stop the train with a virus that goes to the city. Move along the moving train and destroy all enemies of those who have risen in your way trying to get to the locomotive and stop the train. Choose a hero from the many characters represented in the game, each of which has unique abilities and weapons. On your way there will be a large number of enemies, ranging from zombies, ninjas and robots and ending with huge and difficult to destroy bosses. You will have the choice of a huge number of weapons, which you can use in unlimited quantities. Collect various bonuses and apply them during the game.