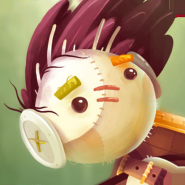 Spirit Roots is an adventure game for IOS, where you will travel across a distant planet. The game’s plot will take you to a distant solar system where the inhabitants of the planet are waging a war that literally tore up a small planet into many parts. The inhabitants of the planet decided to sew all the pieces of the planet and forbid their neighbors to violate the borders of the world. Immerse yourself in the world of diverse flora and fauna and where you will travel to different worlds, each of which has its own mechanics. Join the battle with numerous enemies, defeat strong bosses and go through all the stages of the game.