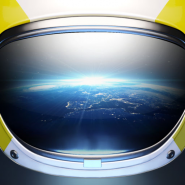 During the expedition to Mars, our scientists discovered an underground world with its own flora and fauna that is suitable for human habitation. Earthlings decided to send another ship for a more detailed study of the planet. But the ship was attacked by hostile forces of the Martians, the weight of the crew was destroyed, only one astronaut named Frank remained alive. He is safe but asks for an evacuation. Your task will be to get to Frank as soon as possible and save him, delivering to the safe place, the nearest space station.