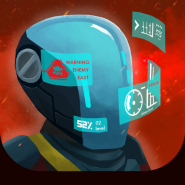 Deliria is an adventure game for iOS where you will explore a distant planet and build your base on it. The plot of the game begins with the fact that in the distant future our planet was destroyed by a huge asteroid and people had to move to other planets, and rebuild their lives. You and the crew landed on a distant planet and your task will be, to command a small group of people building their base. Build a shelter, extract the necessary resources, defend yourself from enemies and look for the missing crew members of your ship. Create your modern and large colony and use powerful weapons against monsters and enemies.