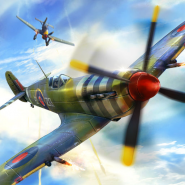 Warplanes: WW2 Dogfight – an exciting action where you take control of a fighter of the Second World War and will perform complex missions. In this game you will fight for Great Britain, the USSR and Germany where you will act as a pilot and command an squadron of the Air Force. Manage the famous aircraft, which in this game are more than 30 such as: Spitfire, Hurricane, Lancaster, IL-2 “Stormtrooper”, La-5FN, Ju 87 “Stuck” and Fw 200 “Condor”. Expand and build your base, creating new hangars for aircraft and crews. Ensure the safety of the base and build air defense weapons and balloons. Develop your management skills and become the best commander.