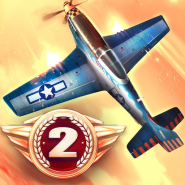 Sky Gamblers – Storm Raiders 2 – the continuation of the popular game for iOS, where you will act as a pilot of the aircraft. In this game you sit down at the helm of the legendary aircraft of the Second World War and will soar over various targets, completing various missions. Join the epic skirmish with opponents and become the best pilot of the game ace in your field. Discover for yourself the new aircraft which in this game are represented by a large number of which are exact replicas of aircraft from the Second World War. Check in action all game modes and achieve excellent results.