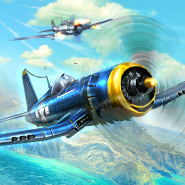 Storm Raiders – An exciting shooter for iOS, where you take part in air battles of the Second World War. Take the under control of the legendary aircraft of the last century and carry out various maneuvers and tricks, taking part in close battles with the enemy. Your task will protect cities and squadrons from enemy bombs and fire. Perform various missions in different parts of the world and reproduce real events, The events that took place in Pearl Harbor, in the Pas de Calais Strait, on the island of Midway and on territory of Germany and France. The game will please you with realistic landscapes and great graphics, as well as numerous game modes where you can play with their friends.