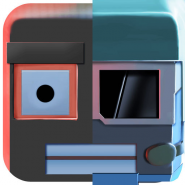 Cops & amp; Robbers Jailbreak is a cubic action game for iOS where you will control the bandits and perform various missions. Take control of the bandits and commit a bank robbery, while violating all laws and firing at the incoming police. Lead the target fire on the opponents and look for cover to avoid becoming their target. Also you will move to the most protected prison in the world in Alcatraz where you will try to escape by raising a riot and fierce battles with security and police. Escape and become the most famous criminal in the world.