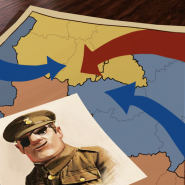 World War 2: Syndicate TD – all actions in this game occur in an alternative universe where all historical events are related to the stymapic culture. Build a tower that would protect against Nazi attacks and win this difficult war. Here, the most important Allied battles in the Second World War were reproduced. Build the robot as the last line of defense from the invaders and lead your troops to victory.