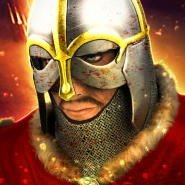 Shieldwall Chronicles – tactical RPG for IOS, where you will manage a detachment of mercenaries and lead them into the dangerous cold lands of Tarren. Take control of a squad consisting of different heroes, each of which will have unique skills and abilities that will be useful to you in a battle. Develop your fighting tactics and consider the strengths and weaknesses of your squad. Lead the fighters into battle and fight against demons, lizards and other undead and use spells and sharp daggers against them. Find a balance between the power of warriors and wizards and save the northern kingdom from destruction.