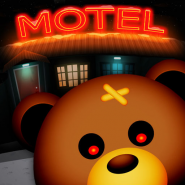 Bears Motel – Survive Five Nights of Horror is a horrific horror for IOS, made in the likeness of the famous Five Nights at Freddy game. In this game you will play the role of an electrician who has to repair the wiring which breaks every night. Take the tools in your hands and move around the rooms, repairing the wiring that is becoming unusable. Your task in this game will live until morning and not catch the eye of the bears that lead you on the hunt. Try to do your work as quickly as possible and go through dangerous missions. If you still notice the bears, then run all the way so they do not catch you. Do not let the bears catch you.