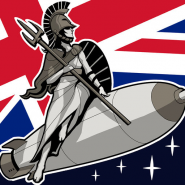 Her Majesty’s SPIFFING is an exciting adventure game for iOS where you’ll be traveling around the galaxy. In this game, along with Captain Frank Lee and his assistant Aled, you will explore the galaxy and attach new planets to the galactic British empire. In the game you will find a lot of humor, logical puzzles and puzzles, as well as meeting new characters and shooting with enemies. Go on an exciting journey and help the queen create his cosmic empire. Explore new planets, fight against insidious enemies and enjoy exciting adventures with the main characters of the game.