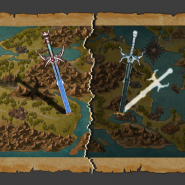 Langrisser Epic is a tactical game for iOS where you take part in a war between states. The plot of the game begins with the emperor Rekar rules a huge empire and to increase his possessions he began to capture new continents and territories. A bloody war began and at that moment a legend appeared about the Wolverine sword. Take control of a huge army and collect a trek to explore distant lands and get a magic sword. The game presents a variety of diverse landscapes, the correctness of their choice and location affects the outcome of the battle.