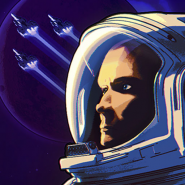 Battlevoid: Sector Siege is a turn-based space strategy for iOS where you will fight with aliens and defend your planet. In this game, you will act as commander-in-chief of a huge fleet, whose duties include exploring diverse planets and fighting enemies. Perform various missions and tasks of the game and do not forget to get useful resources, as well as equip the ships with new weapons. Your enemies will have a unique intellect and in order to win a victory over them you will have to develop your tactics of fighting. Join the epic battles and take to boarding the enemy ships.