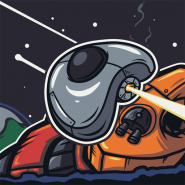 Galaxy Stack is a space shooter for IOS, where you will play like Tetris. In this game, you will take control of a space ship and destroy the alien invaders by laying their wrecked ships in a high tower. Aliens have decided to seize your planet, and you have to give them a fight, and to intimidate to create a tower of their ships. Shoot the ships approaching you and stack them at each other. As the game progresses, gain enough points and discover new types of weapons and unique ships. Get ready for a battle with strong bosses.