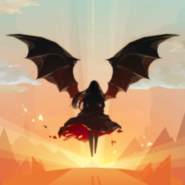 Man or Vampire is an RPG for iOS where you will control a hero who is both a vampire and a human being. The plot unfolds after a global coup, when Raya was gone, and all the souls were captured by vampires. Now your task will be to defeat all enemies and return souls to paradise. Throughout the game you will fight, and pump skills of your hero while collecting the items you need. Improve your hero and prepare him for a battle with strong bosses who will fry you at the end of each level. All levels in the game will be generated randomly, which will allow you to play the game every time in a new way.