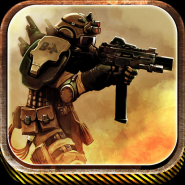 Neuroshima Hex is a desktop strategy for iOS where you will survive in a post apocalyptic world. According to the plot of the game you will find yourself in a world where an irreconcilable war between people and robots is going on. A small group of people united to fight machines and mutants and extract valuable resources. The game can simultaneously play up to four players that can control both people and the computer. Choose which race you will fight and start a war. Before you will open a map, which you will take turns with your opponents to spread their cards, your main task will be to seize control of the map and destroy the enemy base.