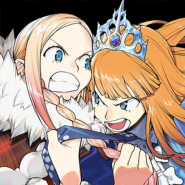 Revolve8 is a card game for IOS, where you will assemble a team of heroes and defeat opponents. In total, your deck should consist of eight cards, where thanks to these heroes you must destroy the enemy heroes and their towers in three minutes. Choose from the numerous cards offered by your characters in the game and make a deck of them. Challenge players from all over the world and fight them in the arena. Apply against the opponents unique skills of each character and use them at the right time. In this game you will meet with heroes already familiar to you, from fairy tales that will appear before you in a new form.