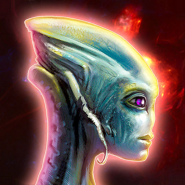 Among the Stars – a board game for iOS, where you will travel through space and fight enemies. This game will take you nearer future, where the war was waged between numerous races, for power and resources. But a much stronger and more powerful enemy has appeared, and now all races will have to unite and rebuff the enemy. Build space bases, conduct trade and set up diplomatic relations between allies. Your main task in this game will be to build your space base faster than your rivals and earn as many points as possible.