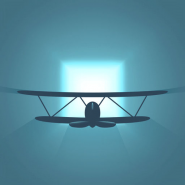 LONER is an arcade game for iOS where you will control a flying airplane. In this game you will act as a pilot who controls the aircraft and flies forward to the light. Fly along the tunnel with numerous obstacles and try to avoid them moving further in the game. Fly on the atmospheric soundtrack and try to fly as far as possible, setting your own record in the game. The speed of the aircraft will increase with each new level and you will have to work hard to pass all the tests and reach the light.