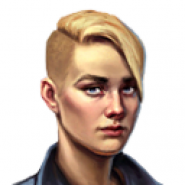 Whispers of a Machine

Whispers of a Machine is a sci-fi game in the Scandinavian noir style. This game will tell you the story of Faith – a cybernetically augmented special agent investigating a series of murders. Take control of the main character and start your investigation which in the end will lead you to a group of fans who are trying to create an artificial superintelligence. All their actions are outlawed, and you have to go through all the trials and find the culprit. In your investigation you will be helped by a high-tech nanosubstantion called Blue. In the game you will find several endings that will depend on the secrets revealed by faith.