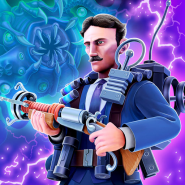 Tesla vs Lovecraft – action for IOS, where you take part in the battle between science and the ancient gods. In this game you will play as a scientist Tesla who was on the verge of a grand discovery when his lab was burned down by the servants of Lovecraft, and a large-scale battle began. Take control of the main character who controls the combat robot and defeat all the monsters. In addition to this, your hero can teleport, use this opportunity to bypass enemies and pass through obstacles. Use a real weapon against the monsters or control the X-ray blade. Climb higher on the leaderboard and check all the game modes.