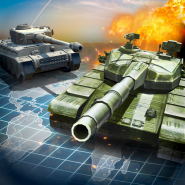 Iron Force – Fight the players from all over the world in epic tank battles! Get into one of the thousands of tank garrisons, make attacks on other players, defend the honor of your team. Take an honorable place in the leaderboard!