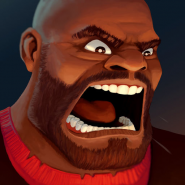 GANGFORT – Pixel cooperative shooter with side view, as in the good old action games on 8 and 16 bit consoles. Run, shoot, shoot and do everything possible to win another fight. In the game you will have the opportunity to play for one of the nine characters. When playing with friends you will need wi-fi internet or 4G / LTE. Also 3G internet with normal speed. The game also has a single mode. In which you can play during the absence of the Internet or just practice before the network matches. Try yourself in several game modes.