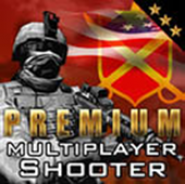 Days of War Premium – a third-person shooter will fully reflect the confrontation between terrorists and the United States. So, the never ending action is presented in three possible variants – the Death Match, the Deadly Match for a while, and also the Scraping of the Territory. Weapons, as always, varied – from snipers to machine guns and assault rifles. The game has the ability to multiplayer up to 8 players, as well as a reward system and upgrade the fighter. High-quality graphics and realistic sound!