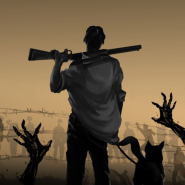 Danger Survival: Zombie War – survive in the world after the apocalypse and uncover the mystery of its appearance. The plot of the game begins with the fact that your hero woke up from a powerful earthquake, and after him the world you are used to ceased to exist. Cities turned into ruins, and bloodthirsty monsters began walking in the streets. Few people managed to survive in this dangerous world, and they joined in small groups and began to survive. Your main task will be to obtain weapons, food and valuable resources. Explore new locations for yourself, fight with zombies and trade with other survivors.