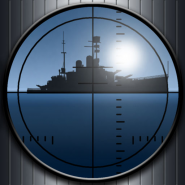 Crash Dive – in the game you will become the captain of an underwater military boat and take control of the submarine on yourself. Your military task is to search for enemy convoys and destroy them. The Atlantic Ocean is large, we know the approximate routes of enemy ships. Regularly cruising in the right square, you will sooner or later find your goals, and after that precise guidance and the torpedo hit send ships to the bottom. Do not forget that the ships have underwater mines and they can easily cover them. So after you were discovered you need to quickly hide in the ocean and fall as far as possible from the descending and exploding sea, underwater mines.