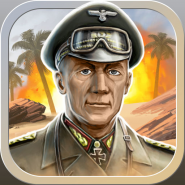 1943 Deadly Desert Premium is a turn-based strategy for iOS where you take part in the greatest times of World War II. In this game, you are transported to the desert in 1943, where the Hitlerite coalition decided to attack a vital reserve replenishment center, but the British army should not allow them to do so. Choose for which of the two sides you will fight and start the battle. Develop your invincible strategy and tactics that will allow you to win and defeat the worst enemy. Capture new territories and show your leadership skills and outstanding thinking. Follow the missions and use powerful weapons to execute them.