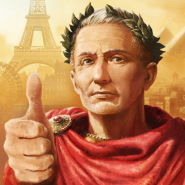 Through the Ages is a game for iOS where you will create the greatest civilization. This is the official version of the popular desktop strategy, where you will act as a ruler, who needs from a small settlement to create the greatest civilization. Collect useful resources, build houses and collect huge troops in order to protect themselves from enemies and to develop new territories. Include diplomatic alliances with other states and attack the enemies. Discover new maps and locations for the game and enjoy great graphics. Master new game modes and challenge other players from around the world.