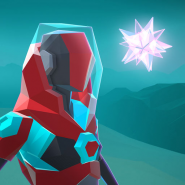 Morphite – The history of the game occurs in the distant future, when mankind has long mastered the cosmos and began to inhabit the various planets of galaxies. In the game, you will play for a young girl named Mira Calais, who, along with her surrogate father, travels through the expanse of space in the capture of various accessories to support her not big store. But soon the usual expedition outgrows the journey, which gradually explains the girl’s addiction to a rare and almost forgotten material called Morphite.