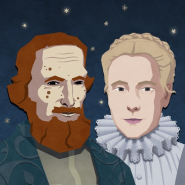 Astrologaster is a story comedy game in London, made in the style of Shakespeare, based on a real and truly ridiculous story. London, 1592 A great plague sweeps through the capital. When doctors in fear leave the city, the hero Simon Forman, “Doctor” of astrology and physics. He not only can cure the sick, but also cannot find their lost pets or even predict their future by reading the movements of the stars! But when the plague ends, Foreman problems begin. The real doctors are returning to London, and they will stop at nothing to expose Foreman. But Dr. Foreman is determined to prove that they are wrong! Read the stars, win a medical license – convince patients to write letters of recommendation. Collect enough letters to exchange them for a medical license. The dialogue of the voiced characters is a sitcom in the style of Sitcom, brought to life by more than a dozen actors.