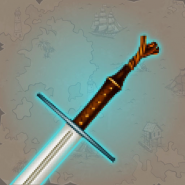 A Knight’s Life is an adventure game for IOS, where you will play the role of a young knight. In this game, you are transported to the medieval world where you will carry out the king’s orders, fight monsters and rob thugs. Explore the fascinating and dangerous world of the game and complete numerous missions and tasks. Upgrade and pump the weapons and armor of the hero. Visit a local wizard and learn how to cast magic spells. Join the battle with strong opponents and save the kingdom. Become a brave hero, which will add legends.